A Mystery Writer Is Born, More or Less: Harry Starke by Blair Howard 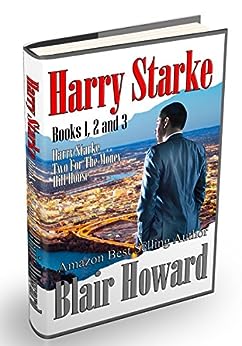 Sometimes I read books out of sheer whimsy. It’s a good way to discover interesting novels, though not always novels that are interesting in the way the authors intended.

Last October, my girlfriend Amy and I spent three weeks traveling across the United Kingdom by train. All those long hours parked at a dining table in a non-reserved coach provided a chance to catch up on my reading and I took full advantage of it. I didn’t read the books I’d intended to — now I can’t even remember what books I’d intended to read — but when I saw an ad in my Facebook feed for a series of books that were free to read for Amazon Prime members, I grabbed one on impulse. Or, rather, I grabbed three: the first trilogy of books in the Harry Starke series by Blair Howard.

A glance at the Amazon Look Inside told me a couple of important things about both Howard and the trilogy. The first is that his books are clearly self published. This interested me because, as an editor, I frequently take books by self-published authors and pound them into readable condition. Some of these books are inept and barely readable, which gives me a chance to flex my writing and editing muscles in ways that I find enjoyable and occasionally profitable. Others are fairly well written and allow me to collaborate with authors who need help from a professional but already possess many of the skills they need to go it on their own. It’s a pleasure to work with them.

The second thing I noticed was that Blair Howard knows how to write. The first few paragraphs told me that he could put together a sharp, punchy sentence, which is a more-difficult skill than most would-be writers seem to realize. And the novel had a gripping opening sequence. I decided to download the books and see if Howard knew what to do with a book once he’d started it.

It turned out that he didn’t. Once he’d put together the premise for the first book, titled simply Harry Starke, the story began to unravel. But the premise was strong: Tough guy cop-turned-private-detective Harry Starke sees a beautiful, elegantly dressed woman arguing in a Chattanooga bar with some dodgy-looking underworld types. He spots her again outside, in the wee hours of the morning, fleeing from unknown pursuers. When the woman spots Starke’s she freezes in her tracks — and jumps off a bridge to her death.

Starke understandably wants to know why the woman killed herself. Conveniently, he turns out to have an old friend on the Chattanooga police force, a gorgeous police detective named Kate Gazzara. She agrees to help him solve the case and, oh yeah, to have dinner with him at his luxurious apartment overlooking the city. (Starke, all-around sensitive tough guy that he is, has an unexpected talent for gourmet cooking.) Starke rounds up his staff of specialized investigators and asks them to learn as much as they can about the woman’s background. Soon enough he has a pile of clues and theories.

What’s missing is a real story. Starke sleeps with the gorgeous detective, with whom he has an ongoing relationship. He discovers a connection between the dead woman and a prominent politician. He investigates the politician and surmises that he might be behind the murder.

It’s clear that Howard, talented writer that he obviously is, has yet to master the art of plotting and had no idea how to advance the story beyond its intriguing but rudimentary set-up. There are no real surprises in the pages that follow. The only genuine plot twist, which comes fairly late in the novel, turns out to have nothing to do with the plot and seems to have been added merely so that the book could have a twist. The case essentially solves itself. Most of the conflict comes from Starke beating up suspects to demonstrate what a bad-ass he is and worrying that the gorgeous detective might get tired of his wandering eye and walk back out of his life and bed. By the time the novel looks like it might become compelling, it turns out to be over.

There are two more books in the package and I may or may not plunge ahead and finish reading the trilogy. (A reviewer on Amazon suggests that it starts getting good with the third book.) Howard’s main problem is that, through the miracle of self-publishing, he’s exposed his writing to the reading public before he’s fully honed his storytelling skills. When and if he does, he may become a major contributor to the American detective novel genre. I hope he gets there, but as of this book he’s little more than a talented dilettante. Still, if you find yourself on a long train trip and have an Amazon Prime subscription, you could do worse than to download this trilogy, if only to encourage him to stick at it until he figures out what he’s doing.

EDIT: After writing this, I discovered that Howard had written an earlier series of novels about the Civil War, which explains his proficiency with the written word. This is his first venture into detective fiction, though, and it’s clear that he doesn’t fully understand the genre yet. Detective writing is trickier than it looks and this novel makes it clear that Howard hasn’t learned the tricks yet. But give him time.